Whilst camped at the well-appointed campsite in Sorell – $6 per night, or 5 nights for $20 (how's that for a deal!) – one of our fellow-campers suggested I check out the 'Men's Shed' in town as they might be able to help out with a couple of small jobs that needed doing on Highland Drover.  The most important one was to get the spare wheel raised properly into it's housing.  Somewhere along the line the handle for the thingy that winds up the spare wheel had gone missing (probably in 2008) and no-one had been able to fully raise the wheel, so it was swinging quite erratically as I drove along. The Men's Shed folks were able to weld the two pieces together and add a T-shaped handle to the top – spare wheel now securely in place.

The second job wasn't quite so crucial but really nice to have.  In 2008 (again!) the original television broke and was replaced with a flat screen one - because it happened in a remote area (Geraldton in WA) I had to fit the mount myself and the easiest place to fit it was on the bunk/drawer at the front and it's remained there ever since.  Scott who was at the campsite suggested putting a piece of wood over the original hole and screwing the mount to this.

Many hands make light work – two men were needed for this job, one carpenter and one helper 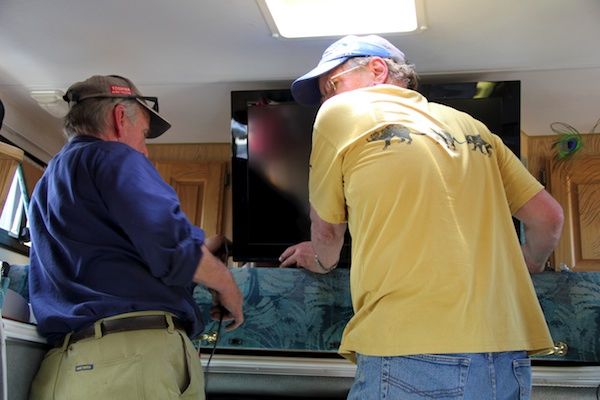 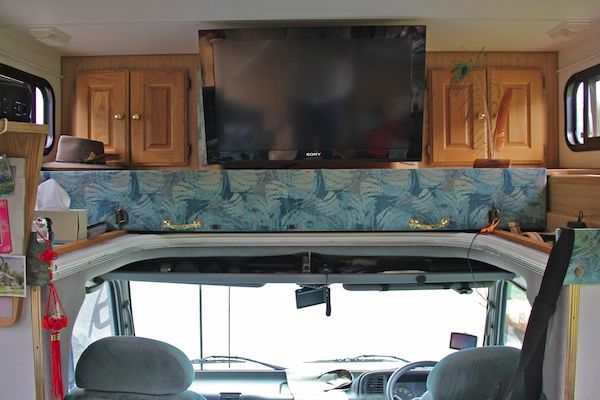 This is the finished job – SO much better than before.  It also reduces the risk of the TV falling on Skye's or my head whilst we are driving along.
Labels: 2012 summer trip, Alpine, Tasmania