75% of Queensland Declared a Disaster Zone

I've just returned from a 4 day trip up to Brisbane for a hospital appointment.  All went well with the Endoscopic Ultrasound and the verdict is there's no sign of infection.  Dr Chang has spoken with two other surgeons in Canada and Belgium, the only other places where they leave these stents in indefinitely, and he's happy for them to remain in place for the foreseeable future. Have another appointment in April. 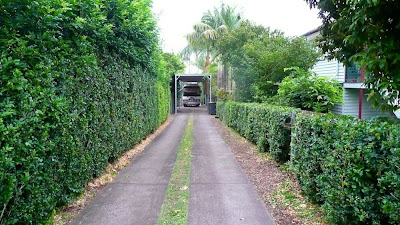 Apart from the day at the Hospital the rest of my time was spent at Mike & Joan's home in Fairfield - a suburb located 5km south of the CBD on the Brisbane River. The location is pertinent to this post as, as many of you will be aware, Brisbane was badly flooded on 12th January. 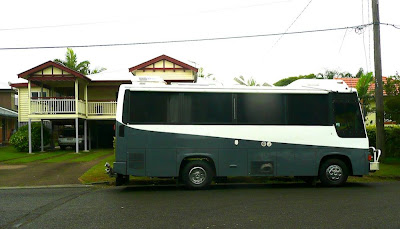 However before I get to that here are some photos of their motorhome which, owing to their guest bedrooms downstairs having over a metre of water through them in the past month, was my home for the four days.

These Brisbanites sure have an unusual way of waking a person in the morning - at 7am each day I was gently awakened as the motorhome was driven (with me still in bed) about 100 metres up their driveway to park gracefully in the street!  (Because of the flood damage a team of tilers were working on the ground floor rooms and so the bus had to be parked outside during the day.)

That's one way to make sure I get up early anyway!! 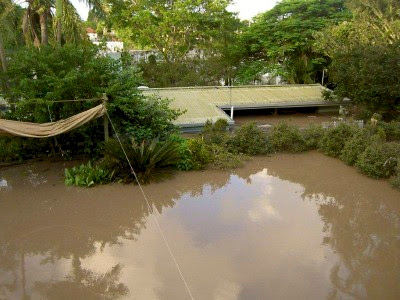 This photo was taken by Mike during the floods and below is a photo I took from nearly the same location this week - as you can see their swimming pool has completely disappeared and the house next door has water up to the roof level (it's a single storey house, fortunately Mike & Joan's house is 2 storey).

The pool needed a new pump and filter and was re-filled only the day I arrived. 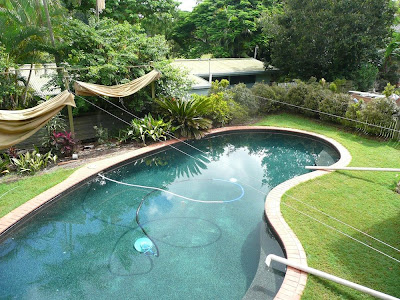 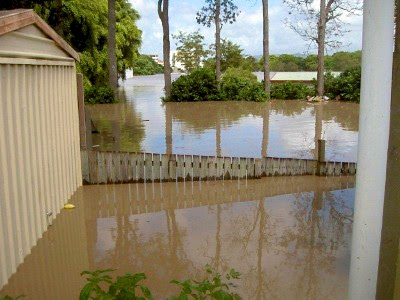 This photo was taken from near the pool and looks out over the back garden - the shed in the background eventually had water up level with the roofline and the fence disappeared from sight.  My photo was taken from the back balcony so the angles aren't quite right but I'm sure you get the idea! 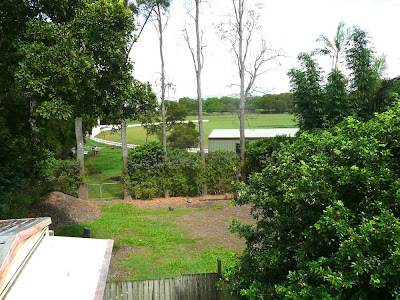 According to Joan the people of Queensland have been marvellous - the support that was offered to them was overwhelming - they had up to 20 people there some days - throwing things out, removing metres and metres of mud, washing things down etc.

Driving around the local area with Joan one day I at first thought that there wasn't too much damage, then Joan started pointing out how high the flood level had been and then I started noticing the eerily empty houses with their doors and windows wide open in an attempt to dry them out.........

I was just looking at a very good  blog article on the affect, especially on children, of the flood, you might like to look at it as well
Labels: 2011 trip, Brisbane Flood