We arrived at Mt Franklin Reserve on Friday to find our friends Jim and Linda (from Scotland) already happily ensconced in this oasis surrounded by native and european trees.
Mount Franklin, or Lalgambook as it was known by the Dja Dja Wurrung, is located 8 km north of Daylesford, 2 km off the Midland Highway (Daylesford-Castlemaine Road). The sheltered extinct volcanic crater of Mount Franklin provides an idyllic camping and picnicing area.

On the Parks Victoria website there is some interesting information on how the Reserve came about:


Growing public appreciation of nature and ‘wilderness’ lent greater urgency to the campaign for protection. Whereas outdoor recreation in the 1850s and 1860s was often contained within highly designed and exotic landscapes such as botanic gardens and public parks, the scenic qualities of natural bushland were more and more popular with the pleasure-seekers of the 1870s and 80s. Sites that provided an elevated view of the surrounding countryside also fitted in with the nineteenth-century taste for the picturesque.

A meeting held in 1875 resolved to memorialise the government to reserve all the land at Mount Franklin for public purposes. The permanent reservation of 157 acres was gazetted the following year. Regulations were also gazetted and a committee of management comprising representatives from each of the municipalities from the surrounding district. In 1891 the Shire of Mount Franklin was given sole control of the reserve.

In 1944 a devastating wildfire destroyed most of the native vegetation on the mount. As a result, the inner and outer slopes of the crater were planted with exotic species, mainly conifers, to prevent erosion and to provide revenue through commercial harvesting. The Forests Commission of Victoria, who advised on the planting scheme, suggested that the crater should be planted with ornamentals such as silver birch and white poplar, oaks, planes and sycamores. Rhododendrons, spirea and berberis were also recommended for planting. 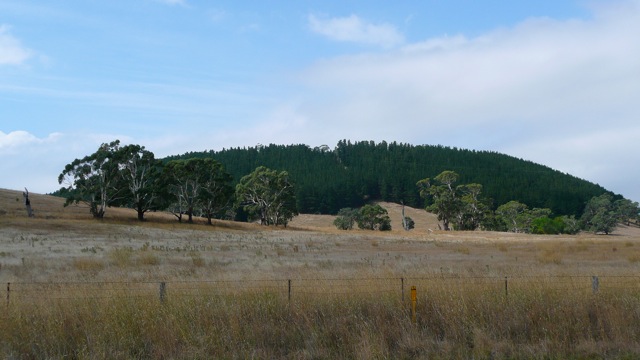 Mt Franklin from the Daylesford-Castlemaine Road

Our campsite amidst the Sycamore Trees
Later on Friday evening my brother James, his wife Maureen and grandchildren Jordan and Caelan arrived in their "New Age" caravan.  It's a really beautifully made little van (only 12foot in length), it comes complete with off-road capability, side and rear awnings, outside barbeque/cooker/oven, and really modern interior.  Jordan, who's 10 slept under the awning in a swag
Friday evening saw us gathered around my "gas bottle" camp fire enjoying an absolutely amazing meal - for starter's Laurie's sister-in-law's famous asian syle barbecued sweet corn - it's the best corn ever - marinated in garlic chili sauce, sesame oil and some other "secret" incredients - followed by the tenderest Scotch Fillet steak from Spa Centre Meats in Vincent Street, Daylesford served with Linda's Garlic Mashed Potatoes - DELICIOUS 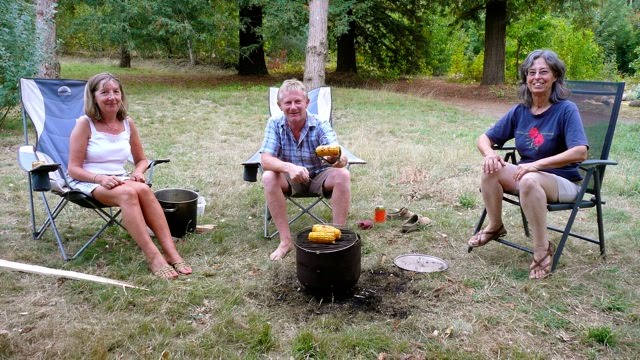 Skye here - enough of this buying food from shops lark - I much prefer to hunt and gather in the wild!!  Take this delectable possum - I managed to corner him in a tree and then sat guard for 2 hours (abandoning my post every now and then to chase the occasional rabbit) - UNFORTUNATELY he did't come down so I missed out on a good feed of possum 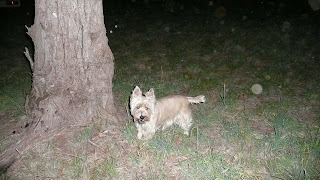 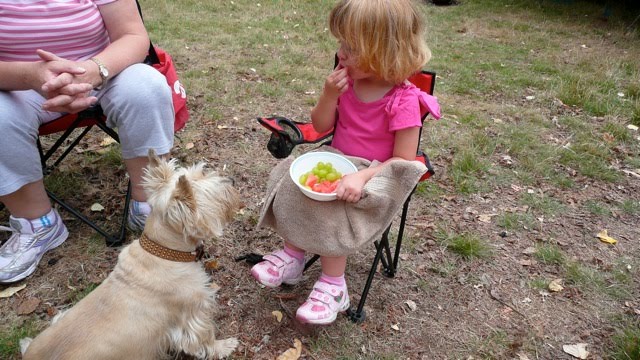 Meantime the drivers were doing their own hunting and gathering - MORE CAFES - this time Cliffy's in Daylesford - delicious (so I'm told, they didn't share with Timmy or I) upside down Peach and Almond cake and Bread and Butter pudding served with a very good thin cream.  Annie took lots of Creons with hers. 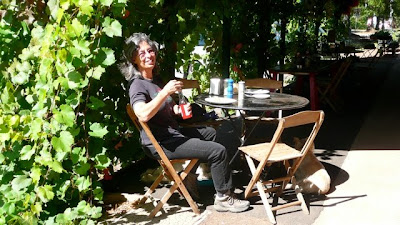 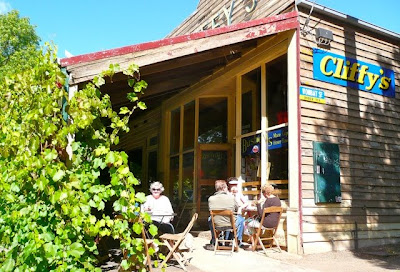