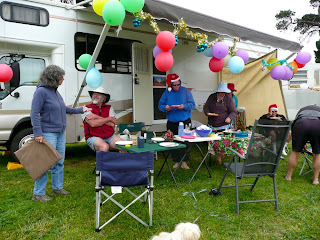 What a wonderful Christmas Day we had here in Oatlands in the Tasmanian Midlands region - the friendly motorhome community again pulled out all the stops to create a fun-filled day.  Laurie, myself and Allan were planning a feast of freshly slaughtered lamb with Dutch Cream potatoes and fresh asparagus cooked on the Baby Q barbeque (which would have been wonderful in itself) but then some motorhoming neighbours suggested pooling our respective feasts and creating one ENORMOUS celebration.

Prior to arrival in Oatlands we spent nearly a week in New Norfolk (near Hobart) - in a caravan park for a change!  Laurie's friend Carolyn joined us whilst we were there and we did a bit of exploring of the nearby areas including a visit to the Salmon Ponds which was the birthplace of Tasmania's legendary trout fishing industry - the trout eggs were sent from England in the 1860's in wooden boxes and kept in the ship's ice house to prevent them from hatching (it took several trips before they were successful) - originally they tried to send salmon eggs but these did not breed successfully, so even though the hatchery is called Salmon Ponds it's really a trout hatchery and is still managed today by Fisheries and Wildlife who release thousands of fingerlings into streams and lakes in Tasmania.
Labels: 2011 trip, Tasmania