Norman Lindsay et al
Because I share the same surname I was interested to discover that in 1864 Dr. Robert Lindsay set up his practice in Creswick and in 1866 moved to a house at the corner of Raglan and Cambridge Streets, a few doors from the Grammar School. His son Norman, author and painter, depicted aspects of Creswick in three of his novels, Saturdee, Red Heap and Halfway to Anywhere. Another son, Percy, painted numerous scenes of Creswick, of which over twenty are in the Ballarat Fine Art Gallery Collection. One Percy Lindsay painting depicts Chinatown, Creswick, a reminder of the Chinese gold miners.

Creswick Museum is currently (until May 2010) staging an exhibition of the art and life of Sir Daryl and Lady Joan Lindsay. Sir Daryl was a recognized artist, writer and arts administrator. His wife Joan was also an artist, but is best known as a writer, in particular for "Picnic at Hanging Rock".


I wondered about the origins of Calambeen Lake, thinking it may have been a volcanic crater, but after much searching found it was the site of a Chinese camp (much in decline when painted by Percy Lindsay in 1894), and was mined by sluicing around the turn of the century. A swimming pool (1910) was constructed in a hole made by the sluicing, it's also spring fed and regularly stocked with redfin and golden perch fish. 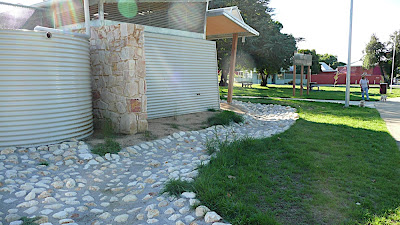 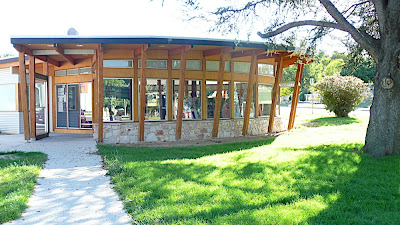 Another view of visitor centre
On Saturday we drove 20kms up the road to another historic mining town - Clunes.  Apart from the picturesque streetscape the Number One drawcard was Widow Twankey's Cafe and Sweet Emporium - absolutely delicious food (not much of a website though) - we shared 2 crepes with fresh asparagus, lemon juice and feta AND mushrooms with hazelnut pesto on organic rye sourdough bread; finishing with iced coffee (total cost only $14 each!!).  I also bought a stick of Edinburgh Castle Rock ($1.60) - when we were children our grandmother used to send us a Christmas hamper and this always included the much desired Edinburgh rock - ahhh memories - it tasted just as good as I remembered.
The Number 2 drawcard was The Clunes Community Bookshop which is run entirely by volunteers and has a really excellent Crime section [Laurie went completely mad here :) ].  There is a Booktown festival held each year in April/May when the whole village turns into a European style booktown 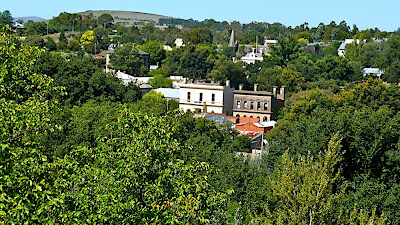 Clunes from the diggings overlooking the town 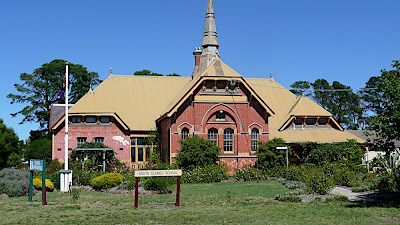 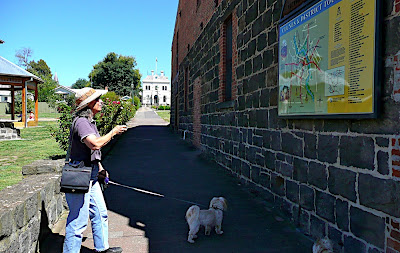 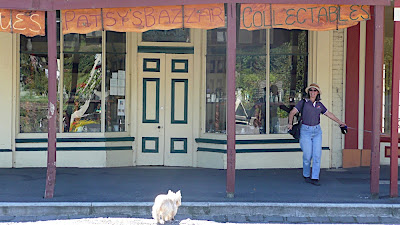 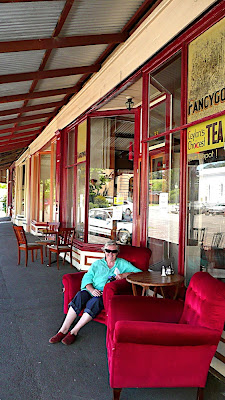 "Another Cafe" in Clunes 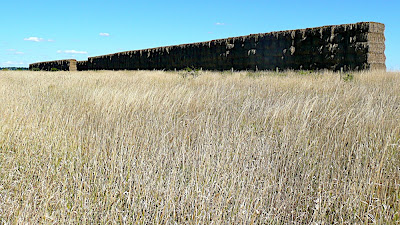 An attempt at being "arty" - hay bales on the way to Clunes
Labels: 2010 trip, Creswick, Victoria