We're now in Busselton and will probably stay for a bit making this our base to tour Margaret River area, the coast and Karri forests around here. We're at the Kookaburra Caravan Park, just opposite the jetty (in photo behind Danni below), and only about 600 metres from the town, $134 per week. On arrival neighbours opposite said they'd just put the kettle on and come and join them for a cup of tea - just the thing you need after setting up — especially if you don't have to make it yourself!! We all ended up chatting for a couple of — nice and relaxing, just what I needed.

The "jinx" caught up with us AGAIN — over the weekend I smelt diesel whilst driving near Margaret River — on investigating found that fuel was pouring out from under the engine area … obviously not a fuel tank leak! Stopped at a garage and he said there was a diesel mechanic down the road who'd be able to look at it the next day (Monday), later that afternoon a man asked if we needed help - he said he knew a bit about trucks - anyway, after looking at it he said it was the overflow pipe that had broken at a weld - he took it out, drew diagrams for us and said to go to Isuzu in Bunbury (50 kms away) the next day to get the part and he'd put it back in for us. So dutifully set off on Monday morning for Bunbury — Brendan in the parts department at Isuzu was very helpful and after consulting a large book he found the part, it wasn't available in Perth, but was in Melbourne … he said … sure enough it came by courier Wednesday 2pm, only costing $40 for the part and $15 freight. Henry the friendly neighour put it back in and wouldn't take any money for it … maybe our luck has started to change??? One interesting side note is that Henry and his wife were farming in Zimbawbe but their farm was taken over in the recent troubles there and they decided to leave and emigrated to Australia 3 years ago, isn't it interesting how it's the people who have been through a lot of hardship who are most willing to go out of their way to help others. 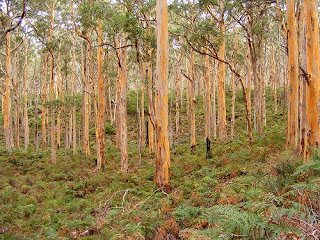 Driving through Karri Forest on the way to Busselton 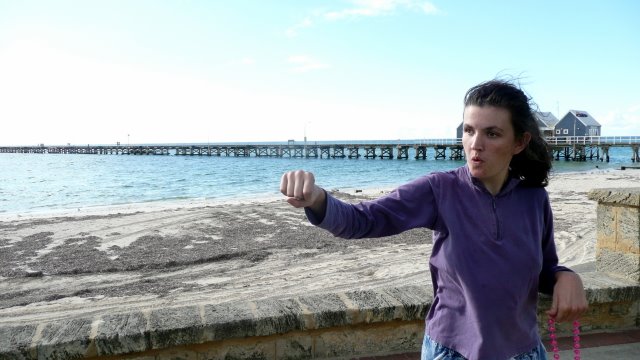 Danni doing a bit of "kung fu" near Busselton Pier 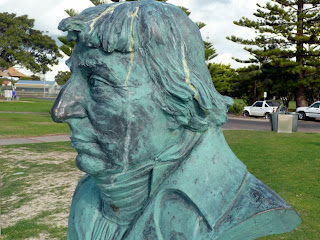 One of the Busselton founding fathers 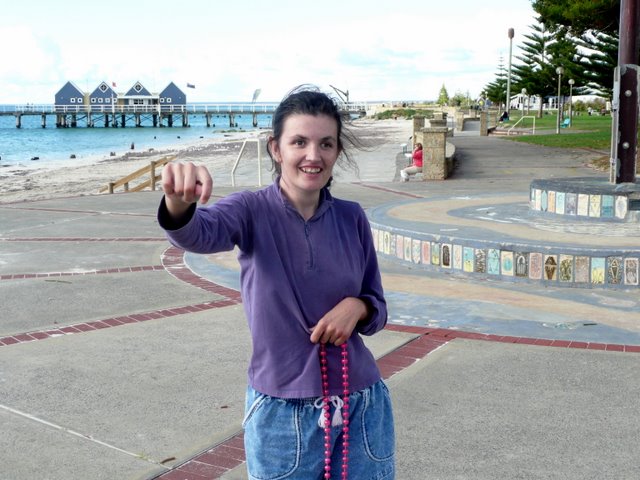